"Miranda's housekeeper let him into the room with Faberge where the inevitable happened... In September 4 female kittens were born, all black shaded silver shorthairs much closer in type to their Burmese mother than their Chinchilla father."

It was in the mid-70s that the late Miranda von Kirchberg, already well known for her Astahazy Russian Blues, became interested in the development of new and exciting colour varieties of the Oriental breed, through her friendship with Angela Sayer. Angela, together with Pat Turner, was working on the tabby, silver and smoke varieties of the Oriental, resulting from the mating of a Chinchilla Persian to a Chocolate Point Siamese which produced a Shaded Silver Oriental type cat (Scintasilva Sue), destined to become the foundation breeding queen for these varieties. 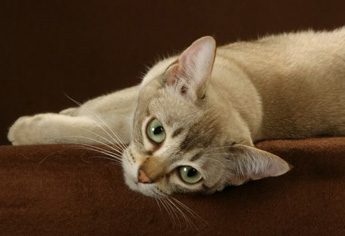 Miranda was entranced by the silver and smoke colours and waited for several years for a suitable female Oriental Silver kitten to start her own breeding programme, but none became available - so instead she acquired Jemari Sanquist, a male Chinchilla kitten, an intended mate for her longhair Silver Tabby queen. At the time Miranda was also breeding Burmese and owned the blue and lilac litter sisters, Bambino Lilac Faberge and Bambino Azurhazy.

In the summer of 1981, arrangements were made for Faberge to be mated to a Champion Burmese, and she was confined to Miranda's study until she could be taken to stud.  Sanquist, shut away from his best friend, made such a fuss that Miranda's housekeeper let him into the room with Faberge where the inevitable happened……..

In September 4 female kittens were born, all black shaded silver shorthairs much closer in type to their Burmese mother than their Chinchilla father. At first Miranda thought of  them as a happy accident, beautiful though they were with their dramatic silver tipped coats, eye-liner and delicate tabby markings on heads, legs and tail. She nicknamed the kittens "Burmillas", taking inspiration from the parents' breed names.

As they grew, and other people saw them, new ideas began to take shape  These kittens, Galatea, Gabriella, Gemma and Gisella, were true examples of the legendary hybrid vigour. Miranda noted that they were much bigger, stronger and healthier than other kittens she had bred, and they also had the most wonderful personalities. In genetic terms, these kittens were the key to a whole new breed group - the Burmese equivalent of the Orientals that Miranda had so much admired. They held the genes for tabby pattern, full colour, silver, and of course for long hair. Already there were silver, smoke and tabby versions of the other main breed groups (the Persian, Siamese and  British Shorthair) - so why not the Burmese?

Miranda, with her knowledge of the Cat Fancy, and also of genetics, discussed the possibilities with many breeders, cat club officials and genetics experts, and an experimental breeding programme was formulated with the aim of producing a recognised pedigree breed according to the rules of the Governing Council of the Cat Fancy. It was always the intention to protect the existing well-established Burmese breed from the introduction of unwanted tabby or longhair genes, so any kittens of Burmese colour and appearance produced were to be registered as Variants and would not be eligible for showing. Careful attention would also be given to maintaining the delightful temperament of these first kittens. 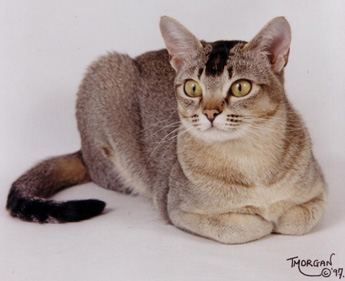 Astahazy Galatea became the foundation queen for the experimental breeding programme, but later, unrelated Burmese were mated to Sanquist, and new lines were started from further Burmese - Chinchilla matings.  First generation Burmillas were then mated to unrelated Burmese, and at this stage the patterns other than the Silver Shaded began to appear - the Smoke with its dramatic contrast between white undercoat and darker top coat, the Self or solid coloured cat including the striking Bombay, a miniature black panther with golden eyes, and the four Tabby patterns - the Classic, Mackerel, Spotted and Ticked, of which the Ticked was (and still is) the most frequently seen. The beautiful Tiffanie, the semi-longhair Asian, appeared in the next generation when cats carrying the longhair gene inherited from the Chinchilla were mated together.

Miranda and her colleagues now realised that they really did have the necessary gene pool to create a whole new group of cats,  so the name "Asian" was coined to cover the whole group, with the name Burmilla being retained for the Shaded  and Tipped varieties, Bombay for the Self Black, and Tiffanie for the Semi-longhair. Therefore, under GCCF rules, the Burmilla is not a breed in its own right, but simply a name for the Shaded Asian. This often causes confusion, as under FIFe rules, with a significantly different breeding programme, the Burmilla is a distinct breed.  In fact, one of the original 4 kittens, Astahazy Gemma,  went on to become the foundation queen for the CA / FIFe group of breeders led by Therese Clarke, who wished to develop  silver shaded and tipped shorthairs only - cats of other patterns were excluded from this programme.

25 years on, and the Asian breed is well established - it is currently more numerous (in terms of kittens registered) than older and perhaps more familiar breeds such as the Devon and Cornish Rexes, Korat, Abyssinian and Russian Blue. Many Burmese breeders have taken up breeding Asians also, as a natural progression and because it gives them so many alternative colour and pattern possibilities! Overall, the Asian breed is becoming increasingly popular in the UK, partly due to many outstanding successes on the show bench, but not least as the result of an affectionate, intelligent nature inherited from the Burmese, making the Asian an ideal family pet.

Short dense coat with some undercoat to give "lift"

General Description of all Asian varieties

As Asians are not currently recognised by any other major registering body apart from GCCF,

it is the GCCF standard that we will describe here. The Asian breed standard has evolved over 25 years, as would be expected - but in line with Miranda's original vision, has always reflected the Burmese standard, as Asians are after all just Burmese in a wider variety of colours, patterns and coat length. The standard calls for an elegant cat of medium size and foreign type, alert, active and intelligent in character and with a very friendly disposition.

Head: Should form a short, balanced wedge with width at the cheekbones, tapering to a blunt muzzle with good width at the jaw hinge. The top of the head is gently rounded, with ears set well apart. In profile there should be good depth from the top of the skull to the lower jaw, with the brow curving gently to the bridge of the nose.  There is a distinct nose break (change of angle), and the chin should not recede and show good depth. The tip of the nose leather should line up with the chin.

Ears: Medium to large in size, broad-based with rounded tips, should be set well apart so that their outer line continues the angle of the upper part of the face to produce a butterfly-wing outline when viewed from the front. In profile the ears appear to tilt forward slightly. Ear tufts and streamers are desirable in Tiffanies, but not in the shorthaired varieties. Kittens may appear to have over-large ears which usually correct once the head has developed fully.

Eyes: Eye shape and set is a very important feature of the Asian, giving the unique "burmese expression", which is of course shared with the Burmese breed. The eyes should be large, lustrous, and set wide apart. The top line of the eye is slanted towards the nose, whereas the lower line is full and rounded.

Body and legs: The body is slender and of medium length and size, feeling hard, muscular and heavier than the appearance would indicate. The back should be straight, and the chest well rounded but not overly broad. Legs are slender, elegant and in proportion to the body, of medium length with the hind legs slightly longer than the front.  The paws are small and oval - often described as "spoon shaped".

Tail: Medium to long, it should balance the body, i.e. the tail, when gently brought around the side of the body, should reach the shoulder. Of medium thickness and tapering slightly to a rounded tip.

Coat: Shorthaired Asians should have a short, fine coat that lies close to the body and feels smooth and satin-like to the touch. The Tiffanie should have a fine, silky coat with minimal undercoat, no woolliness to the texture, and medium to long with a slight "flow".

Faults to look for in an Asian show cat: